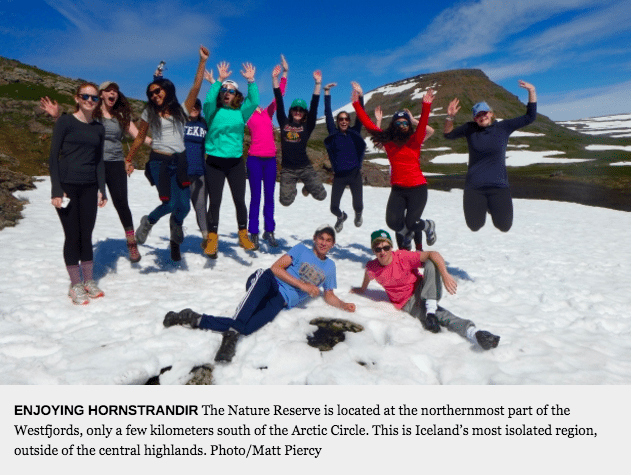 Artic and photo from Iceland Magazine

Freelance writer and middle school history teacher Matt Piercy led a group of American high school students on a two-week journey to Iceland this summer. Here he shares with us a piece he wrote about the experience and the fascinating similarities between Iceland and Hawaii where he lives.

This summer dozens of North Hawaii residents were drawn to Iceland, Europe’s northernmost island nation. More than six thousand miles away, Iceland deemed the Land of Fire and Ice, actually has a lot in common with Hawaii Island.

ARRIVING TO HORNSTRANDIR There are no roads in the region and low-flying planes are banned in order to maintain the serenity of the area. Photo/Matt Piercy

The trip was so extremely special. For 15 days, 14 high school students and two leaders journeyed beyond Iceland’s iconic Ring Road as they kayaked, sea angled, hiked, and trekked throughout the inspiring beauty of the Westfjords region. Beginning and finishing in Reykjavik, students were interested to learn more about sagas and the legendary folklore of Iceland. They visited the Museum of Icelandic Sorcery in Hólmavik village in Northwest Iceland, The Icelandic Sea Monster Museum in Biídudalur village in the Westfjords, took a course from headmaster Magnús Skarphéðinsson at the Elf School, spoke with locals, and were treated to a performance of The Greatest hits in 75 minutes” of Icelandic Sagas at the world class Harpa concert hall and conference centre.

Read more: The macabre necropants, made from dead man’s skin, on display in Hólmavík

Though students are from a scattering of cities; San Francisco, New York, and Chicago to name a few, they all made the decision to travel with Putney Student Travel. Since 1951, Putney has emphasized doing~”having fun, getting off the beaten track, making friends, and being involved with people.”

Students commented how several of the highlights to Cultural Exploration Iceland seemed to include wildlife and stunning landscapes. For example, photographing the puffins at Látrabjarg, which is a promontory and the westernmost point of Iceland, walking alongside arctic foxes on the beaches of Horrnstandir Nature Reserve in the Westfjords, and riding the majestic horses at Stóri Kambur on the Snæfellsnes peninsula in West Iceland. And no one is likely to forget the experience ascending Snæfellsjökull glacier, the starting point for Jules Verne’s A Journey to the Center of the Earth.  All in all, the group felt fortunate to have traveled to Iceland and left impressed by how genuinely friendly Icelanders were.  After an active two weeks and before even departing, several students voiced how they already couldn’t wait to return!

Viking past and abundance of natural landscapes
It is difficult to determine if tourism in Iceland revolves around the Viking past or abundance of natural landscapes. The two may be mutually exclusive. Þingvellir National Park is but one example. A thirty-minute drive from Reykjavik, the capital city, lies Þingvellir, the single best place to epitomize the history of Iceland. Here is where the Icelandic parliament was founded in 930 AD. Besides being protected by UNESCO as a World Heritage site, Þingvellir is situated on the tectonic plate boundaries of the Mid-Atlantic Ridge. Therefore, it is part of a fissure zone with high cliffs and a belt of mountains on three sides. At the park’s southern edge is Iceland’s largest lake. Lava fields similar to those found in Hawaii abound, however being 16t o 18 million years old, Iceland’s lava rock is covered in moss and grass. Stretching as far as the eye can see, the lava fields look like science fiction.

Hawaii Island and Iceland share a similar challenge in striking a balance between maintaining the pristine while managing the effects of growth. Some are beginning to question what measures may need to be taken to ensure a tourism industry built upon sustainable practices.

Ástþór Jakobsson of Guðmundur Jónasson Travel commented, “The government is not doing much to help the tourism industry. For example, there is a need for building walkways to protect nature, as well as constructing larger parking lots at highly trafficked locations by tourists, and improving important roads. There is not even a workers union for the tourism industry!” [Editor’s note: workers in the industry are members of various unions]. And with thousands trodding along paths to waterfalls, hot springs, and to beaches, the integrity of the land, water and culture is likely to be affected.

Under the midnight sun
Within a single degree of latitude from the Arctic Circle, a warm summer day in Iceland is in the 50s, leading some to light-heartedly declare Iceland to be 66 degrees north of summer! But what Iceland may lack for warmth during June or July, it makes up for in light. A visitor will be hard pressed to catch even a glimpse of darkness, as the “setting” and “rising” sun are even in dim light! During the summer months Iceland can be explored around the clock under the midnight sun.

One such visitor was Justin Bieber who filmed the music video of, “I’ll Show You” under the 200-foot cascading waters of Skógafoss waterfall.

An abundance of flowing water allows Iceland to generate 70% of its electricity from hydropower. Icelanders do not culturally revere the earth’s heat and so produce 30% of their energy geothermally. Even the backwaters of some power plants are taken advantage of; for example the Svartsengi power plant created azure thermal pools that National Geographic deems, “one of the most impressive wonders of the world.” Nearly half the tourists to Iceland visit the Blue Lagoon as it is conveniently located in between the international airport and capital city, Reykjavik.

Renewable energy sources contribute to Icelanders paying under 6 cents a kilowatt for energy. Hawaii in turn pays the highest electricity prices in the United States and pays more than 5 times that of Icelanders (33.2 cents as of Aug 12, 2015- according to a HECO report).  Moreover, Iceland already has achieved what Hawaii aims for in 2045, to have 100% of its electricity derived from renewable resources.

Though electricity and hot water are cheap, Iceland is far from being inexpensive. In fact, Iceland is considered one of the most expensive country in the world! Similar to paying a price to live in paradisiacal Hawaii, Icelanders pay the price to live in a country which is able to boast being declared the safest country of the world for six straight years. And they don’t have a standing army!

This magic
Icelanders are regarded as extremely hospitable, exuding their own Icelandic form of Aloha. Yet, there is an assertive marketing of everything Icelandic.  From skyr, an Icelandic cultured dairy product, to stuffed animal representations of the arctic fox and puffin. Even chocolate, sourced from ingredients around the globe, is smartly wrapped and proudly branded, “Iceland Chocolate.”

Icelanders are both comfortable and candid as they share about their Viking past. Visitors can learn more about the 40 sagas, or epic stories, of the Viking voyages, battles and feuds from ancient Nordic and Germanic history. These are shared in museums, in countless books sold in gift shops, and through theater performances.

AN ARCTIC FOX STROLLS ALONG HORNSTRANDIR BEACH The foxes are protected in the region and have grown very tame, even eating out of the palm of travellers  Photo/Matt Piercy

Yet, it’s Iceland’s natural landscapes that are especially captivating. Hawaii residents are able to relate as tourists double as roadside photographers in attempt to capture the setting sun, rainbows, or waterfalls.

Katherine Groves of Kapaau traveled to Iceland to do an eight-day horseback adventure and shared, “I think the beauty lies in how the colors interact with Iceland’s magical landscape.” This “magic” is something Icelanders have 35 words for. Similar to a surfer describing waves, or an Eskimo talking about snow. A “magic” some say is synonymous with hope. “I hope everyone who comes here has the best impression of Iceland. I hope tourists go home and brag about how amazing Iceland’s nature and people are. I want people to come back to see more – there is always more to be seen!” alleged Jakobsson.